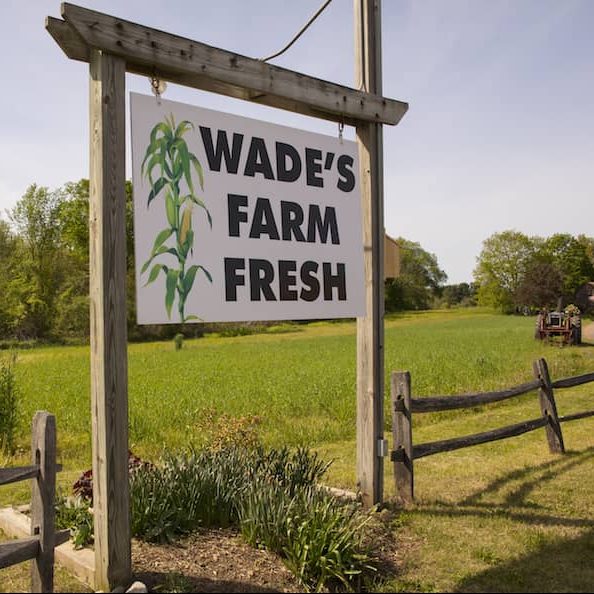 When it comes to farm-fresh food near Heirloom Flats, it’s hard to beat the Bloomfield Farmers’ Market. Right next door to us at Town Hall every Saturday, it couldn’t be closer. Even so, sometimes we can’t wait for the weekend for veggies and a supermarket won’t quite do. For those times, it’s great to have another source for those end-of-summer tomatoes or first apples of the fall. Near our apartments, that’s Wade’s Farm Fresh. This one-stop-shop for all things farm fresh is only a couple of miles away from Heirloom Flats.

Wade’s is a Bloomfield institution, in business since 1919. It’s perennially voted the area’s best farmstand and it’s easy to see why. In season, the market is packed with the bounty of local farms, both Wade’s own and others around Connecticut. Unlike small roadstand stands, though, Wade’s is open seven days, evenings, and in all weather, making it easy to pick up fresh produce year round. (Outside the short Connecticut growing season, they offer food from farther afield. And you can get impossible-to-grow-in-Connecticut staples like citrus all year.) Wade’s is a modern convenience that retains an old-time country store atmosphere —there’s even a shop cat.

Locally grown (and raised and made)

Though Wade’s is mostly about fresh fruits and vegetables, especially in the summer, those aren’t the only local goods in store. Look for grass-fed beef from Bloomfield’s own Highland Art Farm, itself under four miles from Heirloom Flats. For baked goods, try Wade’s selection of muffins and scones from Pasticceria Italia in Bloomfield and bread from Better Than Bakery in Windsor. Connecticut-made cheeses, salsas, and pickles could round out your snack tray. Or pick up some local honey and maple syrup and you have the start of a great breakfast.

We’ll go to Wade’s when the weather cools and it’s time to make butternut squash soup. But we’ll also be there for corn for the grill while it’s still in season. (And we do plan to do some grilling at the Grill-zebo—our courtyard kitchen under a post-and-beam structure.) Aside from stocking our kitchen, however, we can see stopping at Wade’s for all those seasonal touches that make apartments homey. We’re thinking mums and pumpkins in fall, an evergreen wreath in the winter, some seedlings for a windowsill garden this spring, and fresh-cut flowers in the summer. There’s something for every part of the apartment.