Why our apartment complex in Bloomfield is a work of art 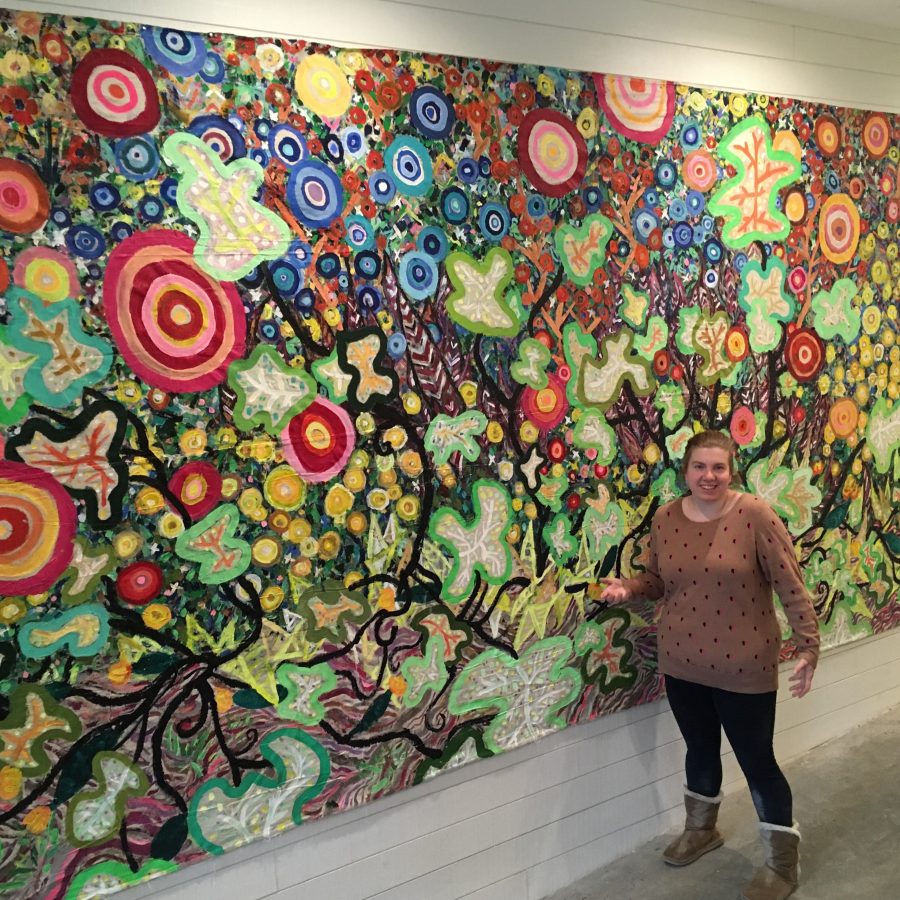 Have you heard that our apartment building includes tons of original artwork? Heirloom Flats has tapped a group of talented Connecticut artists to create new works in and around our apartment complex. We placed artwork inspired by the local landscape and fresh and healthy food throughout the apartment building’s social areas. Look for it as you walk to the mail room or the gym. See it as you relax at the bar. Take it in as you unwind in front of the fireplace. It’s all within view.

You’ll spot the first work of art before you even step into the apartment building. On the carport, you’ll see a three-dimensional American flag mural by Hartford artist Tao LaBossiere. Visible from Bloomfield Avenue, this work is a nod to the tradition of hanging flags on barns. Tao’s murals can be found in public places throughout Connecticut, including a number of restaurants. This painter is so prolific, Connecticut Magazine even dubbed him “Hartford’s Master of Murals.”

Farms, farmland, and their bounty influenced several artists creating work for Heirloom Flats. Landscape painter Katie Jurkiewicz, who hails from New Britain, created a sweeping, colorful painting called “Overabundance” that shows her love of Connecticut flora. (That’s the artist and the painting pictured above.) She painted this massive mural—15 feet wide—on unprimed canvas, letting the fabric’s texture show through the painting. Katie, whose work often depicts her travels near home and abroad, uses raw canvas to complement the natural subjects of her paintings. You can see her work by the entrance off the parking area. It’s near the fitness room. Or read about it on the artist’s blog.

Hartford artist Lindsey Fyfe has two works in our apartment building. One is a group of small paintings just 4 inches square each. The artist describes “Tiny Paintings: Bloomfield Series” as “small moments or memories of natural settings” like meadows and farmland.  Her second work is “Boys and Girls,” a large oil on canvas in the conference room. Its layers of paint seem to bloom.

The gallery—the main hall through the amenity spaces—features six prints by Ellen Hovercamp. She’s a West Haven photographer who works without a camera. For 20 years, she’s used a flatbed scanner to capture her intricate arrangements of flowers and food. For Heirloom Flats, Ellen created sumptuous arrays of flowers, herbs, and produce she selected from two Connecticut farmers’ markets. These highly detailed photos, printed on aluminum plates, are a modern take on the age-old art of still lifes. They bring a summer’s harvest to the apartment complex year round.

Meanwhile, Noe Jimenez of New Haven drew from his experience working on farms when creating his mixed-media pieces for Heirloom Flats. Noe says harvesting is much like painting—both involve collecting and arranging. His colorful three-dimensional assemblages of paint and paper like “Mixed Salad” are vivid like fresh leafy greens.

Destiny Palmer’s paintings for our apartment complex evoke plant forms as well. Her series also recalls textile patterns. It’s fitting because the artist, who works in Connecticut and Boston, often incorporates hand-sewn fabric into her work. For Heirloom Flats, she created a grid of paintings, shown in part here. Up close, you can see a lacy, web-like pattern over the boldly colored forms. Look for her paintings near the main entrance, close to the conference room.

Completing the group of artists whose work appears at Heirloom Flats are two Bloomfield residents, Stanwyck Cromwell and Michael Borders. Details about their works for our apartment complex are forthcoming, but both artists’ careers provide some clues about what to expect. Stanwyck, who recently had a 50-year retrospective show, is known for his oil paintings whose saturated, tropical colors evoke his native Guyana. But he also creates drawings, which are often portraits, and collages.

Michael creates portraits, illustrations, and murals, often on historic subjects. One of his standout works is a giant mural of Connecticut industry that took 25 years (!) to complete. The eight-panel mural has gone on tour, but it currently lives in a state office building in Hartford. His work for Heirloom Flats—along with all of the commissioned artworks—will be revealed when the apartment building opens.